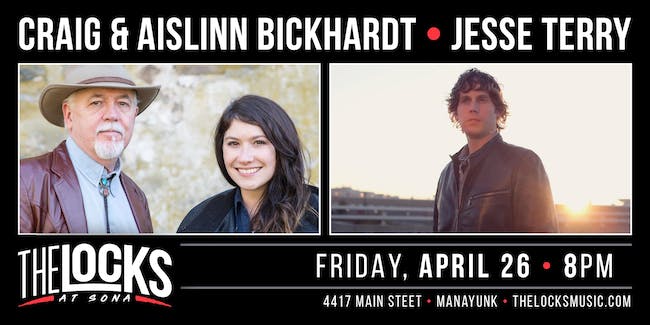 With his latest release, HOME FOR THE HARVEST, Craig Bickhardt demonstrates that folk music needn't be musically dull or iterative. Always in search of forms that challenge not only his songwriting abilities but also his considerable guitar chops and vocal skills, Bickhardt's accessible style is nearly unparalleled in the genre today. There are singers and there are pickers and there are song poets, but very few do all three as well as this.

A true musical journeyman, New England based singer/songwriter Jesse Terry has made it his mission to share his love of music fully and completely, without regard for shading his emotions or tempering his convictions. The ability to create a connection, to bare his soul and express his feelings through his songs has been the defining thread in a career that began in 2010 and has spawned five albums (The Runner, Empty Seat on a Plane, Stay Here With Me, and his latest pair, Stargazer and Natural). A career that has seen Terry play over a thousand shows around the world, including such notable festivals as Bonnaroo, 30A Songwriters Festival, Philadelphia Folk Festival and the Americana Music Association's AmericanaFest.