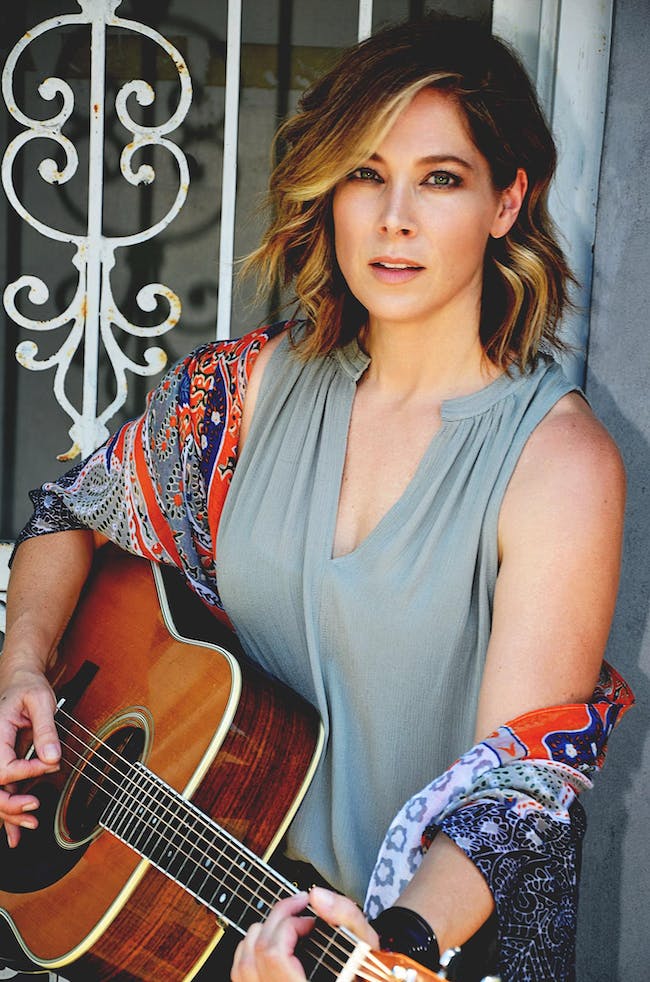 Much has changed for singer-songwriter Alice Peacock since her last solo studio album, 2009’s Love Remains. She’s had three kids, moved to Cincinnati and … gotten 10 years older. “Feel the weight of the world on my shoulders/ Am I wiser or am I just older?” she sings on “Dry Spell,” from her new collection, Minnesota. The record suggests that despite her “wondering what all is yet to be,” she has indeed attained a measure of wisdom.

She uses the word “midlife” but does not follow it by “crisis.” She views her current outlook more as an awareness of life’s fragility and an appreciation of its sweetness. “Being a parent, I don’t know that I could love any more than I do right now,” she says, “so I’ve also never been more vulnerable. I have everything to lose.”

Further evidence of this contemplative spirit can be heard on album closer “God Be Near Me,” about which Peacock says, “I wrote a hymn out of nowhere! I was sitting at the piano one day going, ‘Am I completely screwing this all up?’ And I found myself thinking, ‘Help me to stay focused on love.’” The lyrics ask, “Help me to surrender/ And love the world the way you do/ Now and ever after/ And live in love the way you do.”

On Minnesota, Peacock explores an understanding of love, in particular, that transcends hearts and flowers, Sturm und Drang. “Resting in the Quiet” acknowledges “a glimpse of the divine” in unspoken eloquence: “We don’t have to talk about it/ We don’t have to say a word/ We can wrap ourselves in silence/ Cause I’ve already heard/ Everything your eyes are saying.”

A departure from romantic love, “Free and Wild” is a lullaby sung from the point of view of someone “with a love so fierce” it hurts. Peacock likens parenthood to “going through life with your heart outside your body.”

The album’s title track is a love song to her home state, where her family spends their summers. “I’ve lived in Illinois and Tennessee and now Ohio and I love them all, but there’s something about home … As soon as I get back to Minnesota and hear the birds and smell the air, I feel, ‘This is mine; this is me.’” In the song she recalls sitting in “sacred silence,” watching “the electric light show playing wide across the sky.”

The song “Minnesota” was written in 2018, but some of the album Minnesota was written in 2015, the year Peacock took the third annual Real Women Real Songs challenge – which meant writing 52 songs in 52 weeks. Among them were “Resting in the Quiet,” “Free and Wild,” “In Your Own Backyard” and “Paranoid.” Their appearance on the new record reflects the songwriter’s love of – and commitment to – songwriting itself.

She says of that period in her life: “I was momming full time. The twins were about three, my first-born had just started school, and it was busy. Before they came along, inspiration would strike and I’d go with it. I used to write in the middle of the night. But now … I need my sleep! I can’t pursue the muse whenever she decides to arrive. I have to just show up and say, ‘OK, here I am. Time to write!’ It’s less romantic but still satisfying.”

The writing of Minnesota thus progressed at its own pace, but recording an album was another matter. She was able to collaborate on “Dry Spell” with Wayne Kirkpatrick (author of Eric Clapton’s Grammy Song of the Year “Change the World”), on “Isn’t That Me and You” with _Minnesota_n Jon Vezner (cowriter of Kathy Mattea’s Grammy Best Country Song “Where’ve You Been”), and on “Your Own Backyard” with Dirk Freymuth (Kottonmouth Kings, John Gorka, Peter Ostroushko). Getting in a room with musicians and a producer, however, was a heavier lift. The timing had to work.

She credits Grammy Award-winning producer/keyboardist Phil Madeira, guitarist Will Kimbrough, bassist Chris Donahue and drummer Bryan Owings – aka Emmylou Harris’ Red Dirt Boys – for helping the stars align: “I got a call. They said, ‘Hey, we’re in town if you want to do some recording.’ And I said, ‘Why, yes, I do.’”

The town was Nashville, where Peacock and the Boys cut the basic tracks for Minnesota in four days. “They’ve played together so much,” she says, “that they have this easy musical conversation, so the process was effortless. We didn’t do more than two takes. I didn’t even overdub any lead vocals, which was a little terrifying. Sometimes I’d listen to my vocal and say, ‘I might have been able to sing that a little better,’ and Phil would say, ‘No, actually, that was a pretty great performance.’ Or one of the guys would say of his own part, ‘That take didn’t make me mad.’ We just went for it.”

Peacock, Kirkpatrick and James Hollihan (Bill Gaither, Mighty Clouds of Joy) played acoustic guitar on the record, though John Mark Painter (Brandi Carlile, Kings of Leon, Ben Folds) played the lion’s share of acoustic and also played horns, notably on “Paranoid,” which finds Peacock in a New Orleans musical setting, ever the storyteller, channeling Tom Waits on one of the album’s not-so-autobiographical outings.

Minnesota was recorded at the Butcher Shoppe with engineer Sean Sullivan (Beck, Sturgill Simpson). Derri Daugherty, lead singer and guitarist for the Choir, mixed the disc and sang harmonies with Peacock on several songs, including the title cut, which she calls “an almost-duet.”

Peacock had not been in the studio since recording 2011’s Myrick Peacock, her duo project with fellow “preacher’s kid” Danny Myrick. (2014’s Live From Space was recorded live at Space, the intimate Evanston, Ill., venue Peacock played regularly in her Chicago days.)

But now that she’s done having babies, she intends to return to the studio at regular intervals, having already started writing songs for a follow-up to Minnesota. “When all the focus was on me, on my music, I’d think, ‘I’m looking forward to putting the focus on something else; I’m really tired of thinking about myself.’ These days, as much as it possibly can be, the focus is back on my work.”

During her tenure as full-time mom, Peacock did manage to “keep a toe in the water” with one-off shows. “Not just for me, not just for my fans,” she says. “It’s good for the kids to see me connecting with audiences, to see the passion I have for music.” With the release of Minnesota, she plans to jump back in with both feet, hitting cities on tour she hasn’t visited in years.

She acknowledges how lucky she is to have a co-parent holding down the home front, her husband of 21 years. “We’re staying together for the math homework,” she insists. “It takes both of us to figure it out.” Like many couples with young children, she admits they don’t have much time alone together. They fall into bed exhausted. But she also relates: “We ran into each other recently. He was driving his car; I was driving mine. He pulls around and rolls down the window, and he somehow caught me off-guard. I just looked at him smiling at me and thought, ‘Did I really win this prize?’”

That recognition recalls a line from “Your Own Backyard”: “Before your life goes slipping by you/ Open up your eyes.”

“Things feel very sacred to me at this time in my life,” Peacock confides. “You reach an age where you begin to lose people. The beautiful moments we have, like being out in nature up in Minnesota – ‘the moon waxing over the water, the loon calling to her lover’ – I keep telling myself, ‘Take it in because this is it.’”