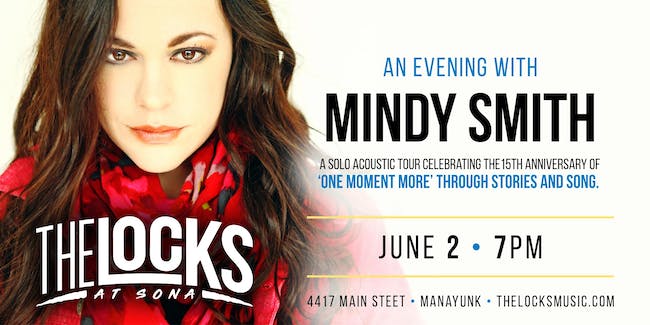 A good rule of thumb when going to a Mindy Smith concert, bring a hanky, a tissue or an extra sleeve. Your tear ducts don’t know the difference between laughing tears and crying tears and you’ll likely be doing both. “Humor is how I compensate for singing so many sad tunes back to back,” says Smith.

Mindy Smith is a Long Island-born, Nashville based singer-songwriter with a clear and honest passion for Americana, jazz, pop, rock, blues, and folk and is a self-proclaimed music genre mutt.

She first created a buzz in the music world in 2003 charming fans with her rendition of Dolly Parton’s “Jolene” for the tribute album ‘Just Because I'm a Woman: Songs of Dolly Parton.’ In 2004, Mindy solidified her place and won critical acclaim with her own debut album, ‘One Moment More’ which was re-issued on vinyl for the first time in 2019, to commemorate its 15th Anniversary.

She has since released four additional full-length studio albums, a Christmas EP, and numerous singles.

Her original songs have been recorded and released by the likes of Alison Krauss, Lee Ann Womack, Faith Hill and many more. Mindy has performed alongside the likes of Emmylou Harris, Alison Krauss, John Prine, and Mary Chapin Carpenter and was most recently the featured vocalist on Kenny Chesney’s charting single, “Better Boat”.