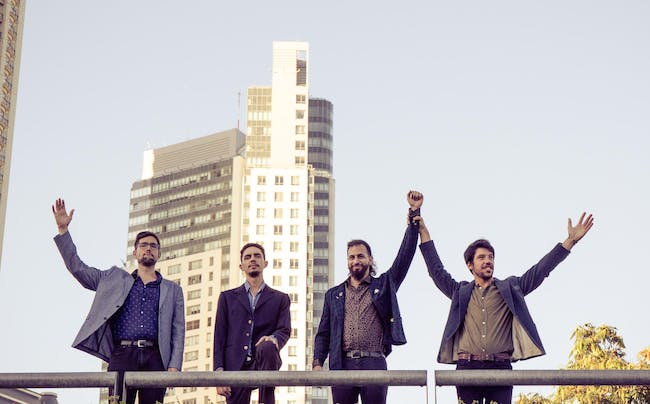 Immigration is a powerful topic for Che Apalache bandleader Joe Troop. A polymath, polyglot, and world traveller, Troop left home at a young age, emigrating from this country in search of a better life. Raised in the North Carolina Piedmont, in the foothills of the Appalachian mountains, Troop came of age to the music of bluegrass and all-night jam sessions at festivals, but being a young, queer man in the South, at a certain point he no longer felt welcome in his own home region.

He took refuge abroad, traveling Europe and immersing himself in his two great loves: music and language. He studied Spanish in Spain, spent summers in Morocco, and eventually moved to Japan to teach English. He carried his music and his fiddle with him always, picking up elements of flamenco, jazz manouche, and swing. In 2010, Joe immigrated to Argentina, and, looking to make friends and build a scene, he began teaching bluegrass.

Nine years later, Che Apalache, led by Troop, features three powerhouse Latin American musicians – two from Argentina, Franco Martino (guitar), Martin Bobrik (mandolin), and Pau Barjau (banjo) from Mexico – and has been taking audiences by storm with their fusion of Latin and American roots music. Famed banjo player and cross-genre trailblazer Béla Fleck was so taken with the band that he signed on to produce their new album, Rearrange My Heart, coming August 9, 2019 on Free Dirt Records.

“I love to work with music that intrigues, excites and inspires me,” Fleck explains, “and that describes Che Apalache to a T! We first met at my Blue Ridge Banjo Camp last year. They had come from Buenos Aires and asked to play for me. I was blown away and they blew away the crowd a few days later. It’s been a blast to get to know them in the creative environment; together we’ve come up with what I believe is a truly striking album. I hope you’ll enjoy listening as much as I enjoyed producing.”

With Béla Fleck as producer and a new album on its way, Che Apalache is a success story, but Troop hasn’t returned to the States after over a decade abroad to comfort listeners. He’s here to challenge the narrative, to speak directly on what American policies and perspectives are doing to the world. “We’re trying to take our message to the people who most need to hear it.”

Troop explains. “We want to have respectful dialogue with people that aren’t coming from the same place we are, and we want to challenge their way of thinking.” Opening with a traditional greeting in the Uruguayan murga style before segueing into the song “María,” which has touches of candombe, flamenco and Spanish Sephardic Jewish music, Che Apalache’s global sensibilities are clear.

The heart of the album, though, lies with the powerful song “The Dreamer,” written about Troop’s friend Moises Serrano. A queer North Carolinian immigrant from Mexico and a DACA recipient, Serrano was raised in the same region as Troop. “The Dreamer” states Che Apalache’s mission: subvert the narrative from within. “We’re reeling people in with music they understand,” Troop explains, “but then we give them a twist. This is all intentional, I’ve had years living outside this country to think about how to do this.”

The power of the subversion lies in how well Troop understands Appalachian and Southern audiences, and also in an honest love for the music. The band spent years perfecting Stanley Brothers-style harmonies, trying to get the sound just right. They then married that sound with brutally honest lyrics lamenting Trump’s rhetoric for “The Wall.” This level of subversion brings its own risks though.

They sang the song at a famous Virginia fiddler’s convention the same day that Nazis marched in the streets of nearby Charlottesville, and had to drop everything and run for safety when an enraged audience member stormed the backstage to attack them.

Che Apalache was formed to enjoy music, to honor it, and to bridge the gap between North and South America, creating a vision of a truly “American” music. Through the controversy and the political fire that fuels Che Apalache’s music, Troop hasn’t lost sight of what first inspired him, the first moment he fell in love with the music.

At just fourteen years old, in a small diner in Boone, North Carolina, he heard a humble man playing with his friends and family. That man was Doc Watson. For Troop and Che Apalache to come full circle and to create a new album with another legend of bluegrass, Béla Fleck, that’s the American dream that Che Apalache embodies.

The young Neo-traditional string band, The Wildmans come from the hills of Floyd, Virginia, in the heart of the Appalachian mountain music tradition. From campsite jamming at festivals and fiddler's conventions and classical music education comes the foundation for musical exploration that sets this group apart, taking the audience on a musical journey that reflects the growth and passion of these talented young musicians.

Aila Wildman, first place winner in Old Time Fiddle and Best All Around Performer at the 83rd annual Galax Old Fiddlers convention in 2018

The group has appeared on stages large and small, performing in festivals such as Red Wing Roots, Chantilly Farm's Bluegrass and BBQ festival, Grey Fox Bluegrass, Floyd Fest, and The Steep Canyon Rangers’ Mountain Song Festival. They also regularly represent young talent along the Crooked Road in regional fiddler’s conventions. Having shared the stage with talents such as Bela Fleck, The Steep Canyon Rangers, The Steel Wheels, Danny Knicely, Sammy Shelor, Sierra Hull, Billy Strings, and more., these young musicians are making their way in the American stringband scene.