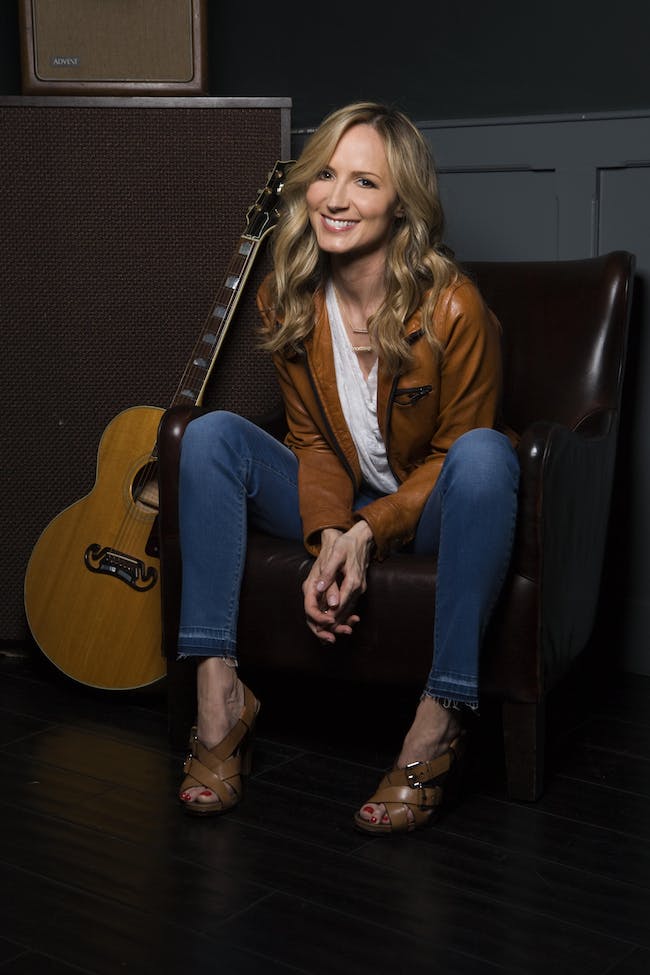 In recent years, Chely Wright has reaped the creative and personal rewards of finally letting her guard down, of simply being herself. Last fall, the acclaimed singer-songwriter and LGBT activist released Santa Will Find You, a charming, thoughtfully nostalgic collection of original songs for the holiday season. Now comes Revival, out May 10, 2019, on Painted Red Music Group, distributed by MRI/Sony, an EP exploring the breadth of Wright’s life as a wife, mother, artist, daughter and friend.

Over the past decade—on projects like 2010’s Lifted Off the Ground, produced by Rodney Crowell, and 2016’s I Am the Rain, produced by Joe Henry—Wright had used her songwriting as a salve to soothe the emotional turmoil that accompanied her extraordinary journey from Nashville star to introspective storyteller. Revival is something different, a masterfully crafted dispatch from a thriving, dynamic life-in-progress. “The fractured state, the fissures that defined me—that was what my records were about, without my even knowing it,” Wright says. “I’m not as broken as I used to be. I can be so happy right now, and I can sing about being happy. Or I can have a lousy day and I can sing about that. Or I can talk about how hard marriage is. All that’s OK.”

Essential to Wright’s newfound freedom and candor is the production duo of Nashville renaissance man Jeremy Lister and the stunningly gifted multi-instrumentalist Dustin Ransom. Wright explains that her trusted team made a point of not letting her veer too close to the tones and themes of her previous music. “Jeremy and Dustin steered me toward narratives that celebrate this idea of, ‘You’re actually the best you’ve ever been as a human.’ That was news to me,” Wright says. “They were able to see, ‘This is a woman who is ready to celebrate where she is at the age of 48. I loved that.’” Brilliantly, her producers were also able to construct impeccable sonic landscapes for each piece; as with the most influential producers, Lister and Ransom’s touch is a marvel of good taste—a seemingly instinctual knack for knowing how much orchestration is just enough to best serve the song at hand. Or as Wright puts it, “Their mission is to get great songs, bring in great players and let those songs breathe.”

Revival kicks off with the stealthy, sultry grooves and smart hooks of “Say the Word,” co-written by Wright and Lister and featuring them as co-vocalists. Despite its radio-staple feel—think L.A. in the mid-to-late ’70s—it grew out of the melodies and rhythms Wright heard in a bit of traditional Israeli music. Cowritten by Wright, Lister and Ransom, “Revival” is somehow both bittersweet and boldly triumphant. While on the surface its lyrics seem to delve into the yearning one feels to resurrect a failed relationship, Wright explains that the track has more to do with closure and hard-won contentment. “I think about past relationships I’ve had, and they will never leave me. It’s something my wife, Lauren, and I talk about a lot,” Wright says. “Those women will be a part of our current relationship, because they helped form who we are. ‘Revival’ is about forgiveness.

“It also speaks to a hope that I know I’m missing right now,” Wright adds. “I wake up and I’m feeling hopeless about a lot of things in the world and our government, in our public discourse. I like that that song stakes a claim on humanity and healing.”

The same could be said for “I Will,” which, remarkably, was cowritten by Wright, Lister and Jennifer Judge, who won a cowriting session with Wright at a charity auction hosted by the LGBT Community Center in New York City. Earnest in its desire to uplift, the message at the core of “I Will” could describe any number of challenges—even overcoming a tragedy. “One can sit down and play it for themselves as a rally call,” Wright says, before raving about her producers’ ingenious sonic touches on the track, among them clinking soda bottles and dripping water. On “As Long as I’m Your Lover,” Wright finds inspiration in the understated roots-rockin’ thrust of classic records like Eric Clapton’s “Lay Down Sally” and Vince Gill’s “Liza Jane.” Lyrically she delves into the warts-and-all trust and intimacy that grows naturally in a committed relationship. “For a very long time,” Wright says, “I hadn’t written a really sensual song that speaks to what it is to be completely emotionally and physically vulnerable.”

Magic and hard work and luck have been the principal elements of Chely Wright’s career since she emerged on the national country-music scene nearly three decades ago. She earned her first major-label deal in 1993; the Academy of Country Music’s Top New Female Vocalist Award in ’95; and her first Top 40 country hit, “Shut Up and Drive,” in ’97. Two years later, the title track to her first Gold album, “Single White Female,” topped Billboard’s Hot Country Songs chart. While still in her mid-twenties, Wright had become an undeniable country-music star, renowned for her strong, adaptable singing and precocious songwriting talent. At the Grand Ole Opry’s 75th anniversary gala, in 2000, she and Brad Paisley performed a song they co-wrote, “Hard to Be a Husband, Hard to Be a Wife.” More triumphs followed. Her 2004 single “The Bumper of My S.U.V.” was a pensive statement of patriotism that became a country-radio staple even without major-label support. With Clay Walker, she wrote his Top 10 hit “I Can’t Sleep,” released early in 2004.

In 2010 Wright released her Random House memoir, Like Me: Confessions of a Heartland Country Singer, and forever altered the social landscape of Nashville. She recognized that the book, a fearless account of her struggles as a secretly gay country artist, was an all-or-nothing proposition. “I knew there would be no ticker tape parade thrown on Music Row for me,” she admits. “There’s a reason why people hide.” But the worry she felt throughout her life, even prior to moving to Nashville, and the pain that came with that anxiety, eventually left her no choice. “Nothing grows in a closet,” Wright says. “I was dying spiritually, physically, emotionally.”

Since coming out and building a second career as an LGBT advocate, Wright has seen her image and reputation in the industry change in fascinating (but not necessarily surprising) ways. Fans who shunned her have come back into the fold, the result of both self-discovery and shifts within the larger culture. The same goes for her colleagues, many of whom supported Wright privately at first but not publicly. In the end, her identity as both an artist who embodies country music’s core values—a dedicated person of faith and a patriot, Wright was playing for the troops long before most artists considered doing it—and a strong gay woman made her an ideal catalyst for changing hearts and minds.

Currently based in New York City, Wright has carved out a niche as a recording and touring artist whose appeal lies in her fantastic aptitude for storytelling. And although she has always remained in control of her artistic direction, even during her years on major labels, Wright is now able to convey the entirety of her journey on her terms exclusively. “That’s my view now—the long game,” she says. “As far as touring, I love it more than I ever loved touring before. I have a lot of stories to tell.”