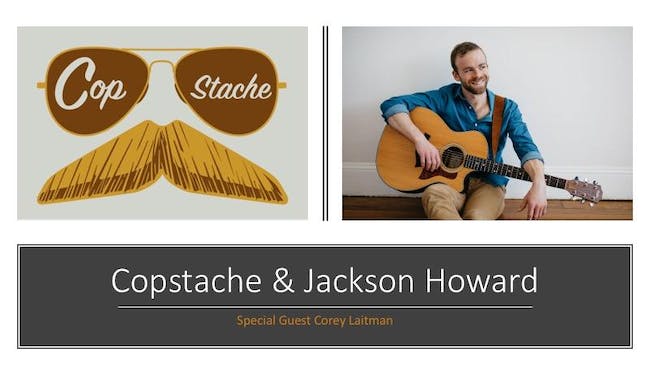 Copstache was a band that terrorized the dive bars of the Midwest in the early to mid 1990s. Now it’s a different band in Philadelphia. It’s kind of a long story. Copstache is composed of J.A. Klemens, Jason Bookman and a rotating cast of friends and collaborators. Their genre is left-populist country infused with a strong sense of the ultimate futility of all human endeavor. Copstache released their debut EP Work in 2019. It features songs about nihilism, unions, and the H-1B visa program for skilled foreign workers.

Relaxed, raw, and steeped in classic acoustic troubadours like James Taylor and Jim Croce, Jackson Howard plays indie folk/rock with as much attention to detail in the fingerstyle guitar as in the lyrics. After completing a PhD in Exercise Physiology and spending 2.5 years conducting research on behavioral treatment for obesity, Jackson made the decision to leave academia and concentrate on music full time. Jackson has toured the U.S. and Europe, receiving radio play and sync licensing contracts with major cable TV networks. His new album “New Day Begun” will be available on all streaming platforms on 2/1/2020.