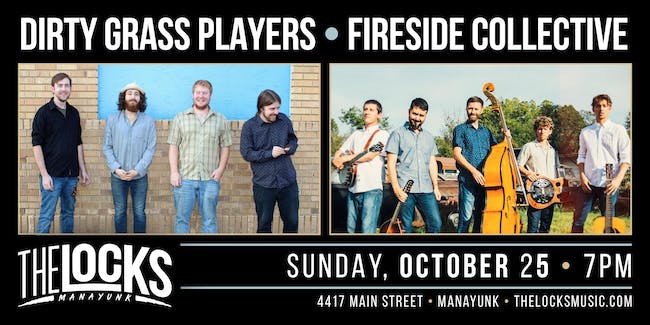 SHOW WAS RESCHEDULED FROM 4/5. TICKETS FOR ORIGINAL DATE WILL BE HONORED.

Hailing from Baltimore, The Dirty Grass Players have established themselves with one toe-tappin’ foot in traditional bluegrass and blazing musicianship that pushes boundaries. Comprised of Mikey Sallemi on Bass, Alex Berman on Banjo, Ben Kolakowski with the guitar, and Ryan Rogers on mandolin, this four piece is successfully bringing their growing fan base a down, dirty and heated performance. Their ability to seamlessly transition from down home bluegrass to spirited improvisation makes each performance unique.

Throw in some Allman Brothers, Pink Floyd or a dash of southern rock and you’ll quickly understand what they mean by Dirty Grass. Their self-titled debut CD The Dirty Grass Players captures this energy and as 2017 winner of Charm City Bluegrass & Folk Festival Band Competition clearly indicates, this is just the beginning. Successfully touring the Mid-Atlantic and festival appearances, this year finds the group expanding along the East Coast and building on this momentum. For anyone that enjoys a musical throwdown by skilled musicians it is time to get your grass dirty.

The last 2 years have consisted of a busy touring schedule that has kept The Dirty Grass Players from releasing new music, but in 2019 they are excited to get new tunes out into the world. Their first single “Grand Voyager” - released in April of 2019 - is a fast-pickin’ tune that pays homage to their humble beginnings. Reminding their fan base why they love them, this tune will also help any non-bluegrass-lover transition into becoming an appreciative consumer of bluegrass music, or should we say “Dirty Grass”. Stay tuned for the full album dropping in the fall.

A quintet who cheerfully disregard every kind of one-dimensional label that might be attached to their music, Fireside Collective has been on a roll since emerging five years ago from the fertile roots music scene of Asheville, North Carolina. In quick order, the progressive bluegrass group released its debut, won the 2016 Band Contest at MerleFest, earned an International Bluegrass Music Association Momentum Band of the Year nomination and embarked on an ambitious touring schedule that’s earned an enthusiastic reception from traditional bluegrass to wide-ranging, eclectic music festival audiences alike.

Blending the characteristic interplay of bluegrass instrumentation and harmonies with strong original material and exuberant energy, Fireside Collective has drawn on folk, blues, funk and a wide variety of bluegrass sounds to create a distinctive body of work that’s all their own. Each member—Joe Cicero (guitar); Alex Genova (banjo); Jesse Iaquinto (mandolin); Tommy Maher (resonator guitar) and Carson White (upright bass)—brings a strong, original voice to his instrument, and the unique contributions of different lead and harmony vocalists complement the variety in the group’s many original songs.

“Depending on where you come from and your experience with folk music, you may think we’re very traditional, or on the other hand, consider us a progressive act,” says Iaquinto. “We appreciate both ends of the spectrum and may lie on a different end on any given night.” But whether they’re bringing the classic sound of bluegrass or exploring new musical territory, Fireside Collective delivers a fresh, energetic approach and a blast of enthusiastic creativity that’s electrifying audiences across the country.