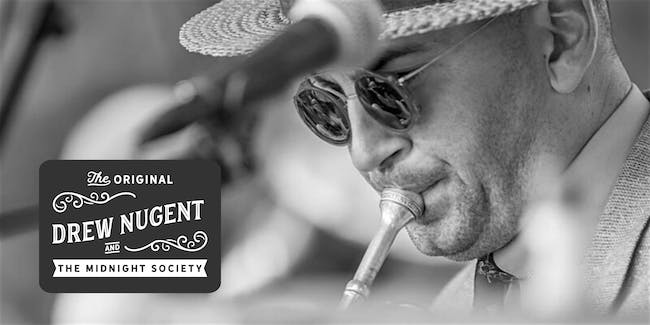 Drew Nugent is a jazz musician and composer from Philadelphia, Pennsylvania. His primary instruments are piano, trumpet, voice, and believe it or not, the tea kettle!

Nugent and the band specialize in playing in the traditional "hot" jazz style of the early 20th Century just in time to celebrate the equinox of the brand new Roaring 20s here in the city. His band, known as the Midnight Society, is regarded as one of the best in the business, and has been together over 12 years. Under Drew's leadership, they bring forth an authentic, yet original approach to an art form over 100 years old to the two largest Art Deco festivals in America each year, a monthly speakeasy party, regular gigs from coast to coast, and through there 5 albums. Nugent's inspiration comes from a who's who list of great performers,composers, and musicians, both obscure and known going back a full century. Although a lot of this music may seem forgotten in many circles, it is alive and well with Drew Nugent and the Midnight Society especially with the advent of a new era that brings with it great interest in prohibition-era America.