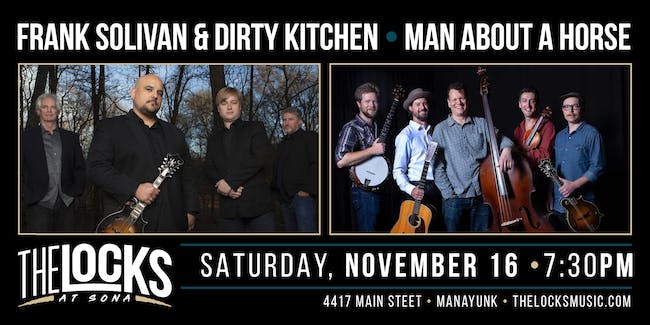 iCal
Google
Frank Solivan and Man About a Horse Co-Bill

With chops so hot, Frank Solivan & Dirty Kitchen were named IBMA’s 2016 Instrumental Group of the Year for the second time, with a third nomination in 2017. Their critically acclaimed album Cold Spell earned a 2015 GRAMMY nomination for Best Bluegrass Album of the Year, yet the accolades don’t end there.

Since leaving the cold climes of Alaska for the bluegrass hotbed of Washington, D.C., Frank Solivan has built a reputation as a monster mandolinist — and become a major festival attraction with his band, Dirty Kitchen. Their respect and deep understanding of the tradition collides, live on stage, with jazz virtuosity creating an unforgettable, compelling performance.

"On the aptly-titled Family, Friends & Heroes mandolinist Frank Solivan shows why one of the rising stars in bluegrass circles deserves a higher profile in the wider world of Americana." – Don McLeese, No Depression

"Family made Frank’s passion for and career in music possible. Friends have come easily as he’s taken his open-hearted way with bluegrass on the road, and heroes have guided his journey and, in many cases, have become like family. Family, Friends & Heroes is a toast to things that matter in life and a testimony to how good music can feel when talent is fused with soul and sincerity." - Craig Havighurst, Music City Roots

"For those of you who’ve been spending time under a bluegrass rock lately, Solivan and his bandmates are one of the hottest acts around." – Shawn Underwood, Twangville

"If Tim O’Brien and Alison Brown ever had a love child, it might just be Frank Solivan. This newgrass/bluegrass foursome spirals through skin-tight banjo picking, razor-sharp mandolin and jazz-tinged concentric circles – all with a degree of control that balances technical precision and improvisational virtuosity." - Siobhan Long, Irish Times

"Frank Solivan & Dirty Kitchen are what bluegrass music needs these days. They are master musicians who fully understand the history and tradition but aren’t afraid to explore new sounds and concepts." - Brian Paul Swenk, Bluegrass Today