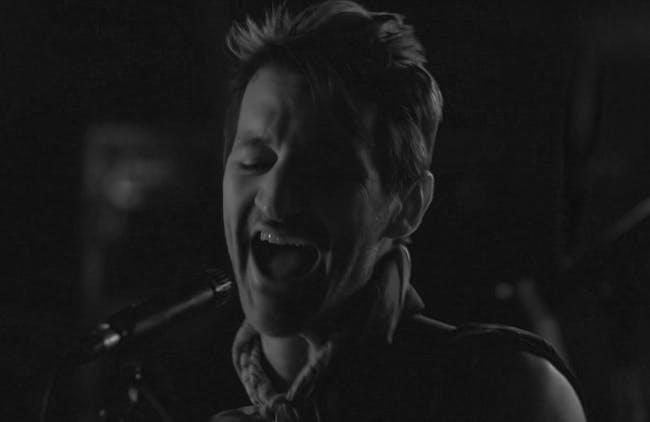 SHOW WAS RESCHEDULED FROM 7/18. TICKETS FOR ORIGINAL DATE WILL BE HONORED.

I was born April 21,1980, at Community Hospital in Springfield, Ohio, to the son of a tire salesman and a social worker. I was the first in my family to pick up an instrument and sing in public. My first memory of loving music was playing with my Lincoln Logs and listening to Michael Jackson’s “Thriller” over and over on vinyl on my parents Panasonic stereo.

I went to preschool at Fairlyland Castle and Kindergarten at Reid Elementary. Growing up in the country and moving to the city at age 6, I was a sensitive kid who cried at school almost every day for years. No one ever really knew why. In the second grade I asked my teacher Mrs. Duncan if I could get up in front of the class and sing a song. Emulating Marty McFly from “Back to the Future” I sang “Johnny B. Goode” playing air guitar and doing the splits. I never sang in public again until I tried out for a play in high school. I was too afraid to sing in try outs, but they cast me anyway with a lead singing role in the musical, Oklahoma. I practiced my parts by singing along to a cassette tape in my car, and I learned to sing in front of people for the first time in the rehearsals for the musical. Some of the theater kids played guitar, we would party on the weekends and they’d invite me to sing along as they played.

I got my first acoustic from a girl in the neighborhood for $100, took a few lessons, and then quit because it was too hard. Two years later, after turning down an opportunity to play golf on a scholarship to Ohio University, I went to Miami University of Ohio and lived in an arts dorm. I forced myself to learn the guitar and started writing songs as soon as I knew a couple of chords, and was asked to join a band that year and be the singer. We played some gigs for a couple years and then broke up.

I recorded my first solo album called “No More Crazy Love Songs”, made my own copies which sold them to friends and classmates around campus, and started to play shows in the bars “Uptown” in Oxford, Ohio. Shortly after, a production company in Philadelphia showed interest in me and I moved there after graduating with a creative writing/english literature degree.

After living in Philadelphia for 6 months with not much luck, I moved to Nashville to live with two of my buddies from college. I got a job at a shop on Broadway called Legend’s Gifts selling souvenirs to tourists and made a 5-song demo called the “Never Sessions” with my friends Ian Fitchuk and Justin Loucks, which got the attention of Island Def/Jam records in New York.

I ended up deciding to make an album with Dreamworks in Los Angeles, but the record label folded the day before we were supposed to fly to L.A. to start recording. Later that week, I got invited to go on my first real tour in America opening for “Over The Rhine” but 2 shows in, the whole tour was cancelled.

I came home to Nashville and my friends offered to play for free and helped me make my first full length record, “Lost and Found”, which led to my first record deal with Nettwerk America. Nettwerk put the record out in the US, Canada, and Europe, and I signed with Nettwerk Management and Creative Artists Agency (CAA).

From 2005-2010 I made several more records, including “House of David,” “Homecoming,” “The Learner,” “42 1/2 minutes” and “Flying Upside Down” (which featured Mike Campbell and Benmont Tench from Tom Petty and the Heartbreakers). During that time, I played hundreds of shows opening for artists like John Mellencamp, Mat Kearney, Josh Ritter, The Cranberries. By 2006-2007, I started to headline my own shows in the US.

In 2011 I parted ways with Nettwerk Management and CAA and became an independent artist. Since then, I have toured the country mostly solo-acoustic, played nearly 600 shows, and made several more albums, including “Balls,” “Songs For a Prisoner (Live from Prison),” “So On and So Forth.”

My new record “Natural Man,” set for release this year, is a reunion with old friends Paul Moak and Ian Fitchuk who helped me make my first record, “Lost And Found”, in Nashville. Several of the songs on the new album feature co-writes with artist friends including Brian Elmquist (The Lone Bellow), and Joy Williams (The Civil Wars).

I live in Nashville with my wife Jane, and two girls, Emma and Clara.