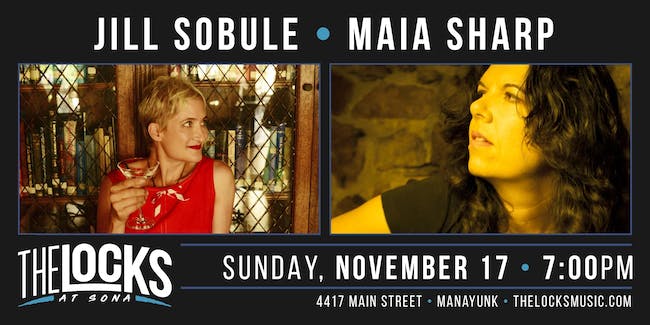 “Nostalgia can be wonderful and amazing. It’s OK to look back. But then you gotta get the fuck out of there.” So says singer-songwriter Jill Sobule, explaining the theme of her new album, Nostalgia Kills.

On Nostalgia Kills (out September 14 on Jill’s own Pinko Records), the woman hailed by The New York Times for making “grown-up music for an adolescent age” turns her warm wit and poet’s eye on herself more than ever before, revisiting moments from throughout her life that made her into the person she is today. It’s an especially poignant look back at childhood — “exorcising some junior high school demons,” as she puts it.

Looking back is a new experience for Jill Sobule. Ever since she first caught mainstream attention with her 1995 song “I Kissed a Girl” — the first song about same-sex romance ever to crack the Billboard Top 20 (and no relation to the later Katy Perry tune) — she’s always pushed forward, exploring new sounds and subject matter with each passing album and refusing to be pigeonholed by her early hits (which also include the ‘90s alt-rock anthem “Supermodel,” featured in an iconic scene in the film Clueless).

Along the way, Jill has shared stages with the likes of Billy Bragg, Cyndi Lauper and Warren Zevon, written music for TV and theater, and been a pioneer in the art of crowdfunding, raising so much money for her 2009 album California Years that a then-unknown startup called Kickstarter came to her for advice. She’s also been active in numerous social and political causes, performing at prisons as part of Wayne Kramer’s Jail Guitar Doors project, playing dates with Lady Parts Justice’s “Vagical Mystery Tour,” and curating Monster Protest Jams Vol. 1, featuring protest songs by Tom Morello, Billy Bragg, Boots Riley, Amanda Palmer, Jackson Browne and many other great artists — including Jill’s own “When They Say We Want Our America Back, What the F#@k Do They Mean?”, which traces the history of anti-immigrant sentiment in America.

For Nostalgia Kills, Jill worked with her good friend, Australian singer-songwriter Ben Lee, to cull the album’s 11 songs from a collection of over 100, representing nearly a decade’s worth of material accumulated since the release of California Years. In turning those songs into an album, she received a little extra motivation from an unlikely source.

“I was at an industry party,” she recalls. “And I heard this total douche saying, you know, once someone reaches the age of 40, they can’t write a good song. And I went up to him and I was like, ‘You don’t know me, but you’re an idiot.’”

Making it her mission to prove her new nemesis wrong, Jill took the songs into Lee’s home studio in Los Angeles with a supporting cast of players that included John Doe (X), Wayne Kramer (The MC5), Petra Haden (That Dog), Roger Joseph Manning Jr. (Jellyfish), and Richard Barone (The Bongos). “This was done with a lot of friends,” she says. “It was very organic.” Many of the final mixes even contain elements of the original demos, recorded with various apps on Jill’s iPad.

Right from the jump, Nostalgia Kills proves that this songwriter, despite being a few years north of 40, is still at the peak of her powers. How many artists of any age can write a song like “I Don’t Wanna Wake Up,” an Old Testament head trip inspired by a bad breakup, the death of a parent, and microdosing mushrooms? Let alone have the nerve to make it their album’s opening track?

From there, Nostalgia Kills explores its titular theme through a collection of songs that ponder the past without ever lapsing into easy sentimentality. “I Put My Headphones On,” as catchy as anything in Jill’s catalog, captures the cozy feeling of tuning out the outside world with a favorite record. “Almost Great” is a ukulele-laced ode to youthful brushes with success and adult battles with procrastination. “Forbidden Thoughts of Youth” is a beautifully rendered portrait of adolescent unrequited love, as Jill looks back at her first gay crush (“an incredible combination of Marcia Brady and future meth-smoking biker chick”).

“Headphones” and “Forbidden Thoughts” will be part of #Fuck7thGrade, a one-woman show about “the worst year of my life,” and just the latest of Jill’s many forays into theater. Nostalgia Kills features new versions of several of Jill’s best songs for the stage: “There’s Nothing I Can Do” is a defiant breakup anthem from the off-off-Broadway musical Prozak and the Platypus, sung from the perspective of a rebellious 17-year-old girl. “25 Cents” is from Times Square, a new musical based on the 1980 cult film of the same name — and Jill’s own memories of visiting New York City as a teenager, back when the city was still “scary and fascinating and full of junkies.” And the gorgeous ballad “Tomorrow Is Breaking My Heart” is one of several original songs Jill wrote for a new adaptation of Yentl, Isaac Bashevis Singer’s tale of gender-bending romance later made famous by Barbra Streisand’s film adaptation.

There are two versions of “Tomorrow Is Breaking” on Nostalgia Kills — a mournful duet with John Doe, and a special bonus track version featuring an amateur musician named Nicholas Ford, who made a pledge to the Nostalgia Kills Kickstarter campaign in which the prize was to sing a duet with Jill. “I decided to do it in a different style with a piano and he kicked ass,” she says proudly of Nicholas’ crooning accompaniment.

Nostalgia Kills’ bonus tracks also include “The Donor Song,” on which Jill gives shout-outs to her Kickstarter backers (including Avengers director and Buffy the Vampire Slayer creator Joss Whedon, whom Jill calls “my personal lord and savior” because he donated at the highest level), as well as lovely covers of The Stairsteps’ soul classic “O-o-h Child” and “Don’t Let Us Get Sick,” a heartbreakingly beautiful, late-career ballad by Jill’s friend and mentor, Warren Zevon, with whom she tour shortly before his death in 2003. “He used to come out during my set to sing ‘I Kissed a Girl’ with me,” Jill remembers. “He would always wink at me when we would sing ‘They can have their diamonds and we’ll have are pearls’ to let me know he got the clitoral reference.”

For all its graceful, funny and heartbreaking explorations of awkward youth and grown-up regrets, Nostalgia Kills is as of-the-moment as anything in Jill Sobule’s catalog. Through her own experiences, she explores issues our society still collectively struggles with (LGBTQ rights, teen mental health, our unhealthy obsession with staying forever young) and gently skewers our tendency to dwell on the past at the expense of addressing the present. As she sings on the title track: “We look at ourselves in a long row of mirrors/We get smaller and smaller with each passing year/We have to keep moving or die.”

Maia Sharp wears many hats. She has had her songs recorded by The Dixie Chicks, Bonnie Raitt, Trisha Yearwood, Keb’ Mo’, Cher, Edwin McCain, Terri Clark, David Wilcox, Art Garfunkel, Lizz Wright, Paul Carrack, Lisa Loeb and more. She produced Edwin McCain's last album Mercy Bound (429 Records) and most recently two songs for Art Garfunkel's retrospective double album The Singer (Sony). And through it all, Maia has continued to record her own albums. She has seven solo releases, one collaborative project with Art Garfunkel and Buddy Mondlock and her latest duo project Roscoe & Etta, with writing/production partner Anna Schulze. Each release has led to extensive touring throughout the US and UK and appearances on Mountain Stage, Acoustic Cafe, World Cafe, NPR's "All Things Considered," CBS Early Morning and the Today Show to name a few. Her latest album Roscoe & Etta is available now everywhere with the duo’s follow up release “Blessings, Curses, Anchors and Wings” coming this August.