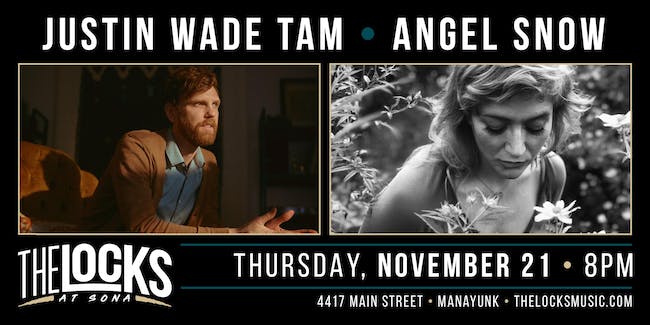 Justin Wade Tam (of Humming House) is a singer-songwriter based in Nashville, TN, whose narrative lyrics bring listeners into a sonic landscape at once hopeful and calming. Tam has created his first solo EP titled A Place To Land with producer Jordan Lehning (Rodney Crowell, Andrew Combs, Rayland Baxter). A Place To Land is an apt title for this impressive debut. The introspective, four song collection seeks to find and define a sense of place. Its elegantly sparse production and simple organic instrumentation provides the perfect mix for Tam’s songwriting to shine. While these are the first songs Tam has released under his own name, he has been writing and touring with the folk-rock ensemble Humming House for eight years. His songs have been featured on television networks that include Starz, The CW, ABC, CMT, and independent documentary films. Performing nearly 100 dates annually with Humming House, Tam has been direct support for well know acts such as Kacey Musgraves, Emmylou Harris, and Drew Holcomb. He has also performed internationally in the Caribbean and Central Asia.

When the lights go down and the world turns off, the truth comes into focus.

“I think we should all just sit in the dark with one another and see each other for who we really are,” she implores. “Don’t deny who you are now or who you’ve been in the past. Be in the moment more. A lot of my music is about this.”

With warm delivery, soulful intonation, evocative lyricism, and a hint of pop ambition, Angel continues to translate urgent moments into unforgettable music. Over the past decade, she went from penning songs for the likes of Alison Krauss to stepping into the spotlight as a buzzing independent solo act on her 2012 self-titled debut, Angel Snow. Its lead single “These Days” eclipsed over 6 million Spotify streams and counting as she attracted a growing fan base.

In the ensuing years, she built an international profile by regularly touring the globe. 2016’s “Secret” notably featured in a popular video by internet superstar Ingrid Nielsen entitled “Something I Want You To Know (Coming Out),”which went viral with 17 million views. Meanwhile, her 2017 sophomore outing, Magnetic, earned widespread acclaim. Among tastemaker praise, American Songwriterwent so far as to describe it as “superb.” 2018 saw her progress once more. After meeting Ben Kramer of Old Sea Brigade, she enlisted him to produce her Arrows EP.

Together, they unlocked new facets of her sound, embracing swaths of purring ambience, expansive omnichord, delicate guitar, and bass transmissions.

“Ben brought a completely different element to what I do, but we maintained who I am at the same time,” she explains. “We found a lot of common ground we loved. I also messed around with the range of my voice and how deep I can go without being self-conscious. I’m embracing my voice for the first time. We’re bringing the vocal up. I’m much more confident in how I sing. I enjoyed more freedom than I ever have in the process. Lyrically, I was able to craft more of a creative narrative. I love writing short stories. The storytelling became a central part of the EP.”

Over the course of five months, they assembled the six-track EP. In the spirit of experimentation and evolution, they envisioned this body of work in two formats: full production and acoustic. The latter allowed her to experience the songs at their rawest.

“I was able to get outside of myself and see the range of the composition in the acoustic recordings,” she elaborates. “It opened me up a little bit more to embrace the songs for what they are. The emotions really showed through and shined. The feeling behind everything gets to the forefront. It’s a great way for the lyrics and stories to resonate.”

The first single “Window Seat” illuminates the nuances of her narration. Delicate beats and sonic flourishes underscore a vivid and emotionally charged portrait of moving on.

“It’s about going through the storms of life, accepting what’s ahead of you, and taking a window seat to get passed it,” she says. “I was envisioning this girl on a plane, looking out the window, seeing those clouds in the distance, and thinking, ‘I’m going through this by myself.’ You’re accepting who you are and the role you play on the planet in addition to bracing yourself for the next thing to come.”

Her voice echoes with a stirring sense of soul on “Arrows,” which details“a love story of two people who have to let each other go.” “Higher Urgency” hinges on a positive proclamation highlighted by robust vocals and infectious energy.Meanwhile, the unexpectedly upbeat “Maze” recalls an evening of reckless abandon over lush instrumentation.

“Making ‘Maze’helped me,” she admits. “You recognize you can’t get too out of hand. Any of us could go down that wrong path and become too far gone. Somehow, there’s always been a threshold that hasn’t allowed me to go any further when I have tested the limits, so to speak. The experience led me to‘Maze.’I think a lot of people can relate to it.”

In the end, Angel beckons you turn off the lights, close your eyes, and drift off to this music.

“I’m just trying be the best person I know how to be, embrace any and all flaws, and create to the best of my ability,” she leaves off. “I want to be in the moment. I want to use all of the gifts that I’ve been given and take advantage of them while I’m on this planet. That’s my goal.