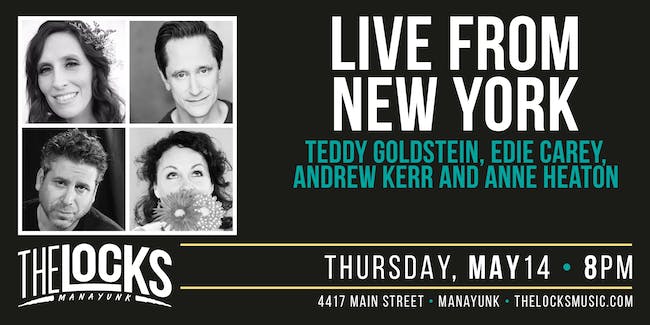 Award-winning singer-songwriters Edie Carey, Teddy Goldstein, Anne Heaton and Andrew Kerr have been close friends since they met in the vibrant New York City folk-pop scene of the late 90's and early 2000s, hanging at open mikes in the West Village, sharing brand new songs, and learning together how to do music for a living. They shared shows here and there in various pairings, but it wasn't until they put together a showcase of New York songwriters for a music conference and dubbed it "Live From New York" that their collective synergy onstage, both musically and comedically, was undeniable. They interspersed deeply moving songs and rich harmonies with hilarious off-the-cuff repartee. Someone once likened a Live From New York show to watching a musical episode of Friends where everyone is Phoebe. What was supposed to be a one time showcase quickly became a pretty magical side project for them, and soon Live From New York was performing at festivals and listening rooms across the country. They toured together for several years, recording an album in 2002, and then all four set off on their own, rich musical paths. Come see these dear friends and seasoned songwriters reconnect and harness the same synergy, soulfulness, and hilarity they always experience in each others' company. Don't miss this great evening of expert songwriting and killer humor.