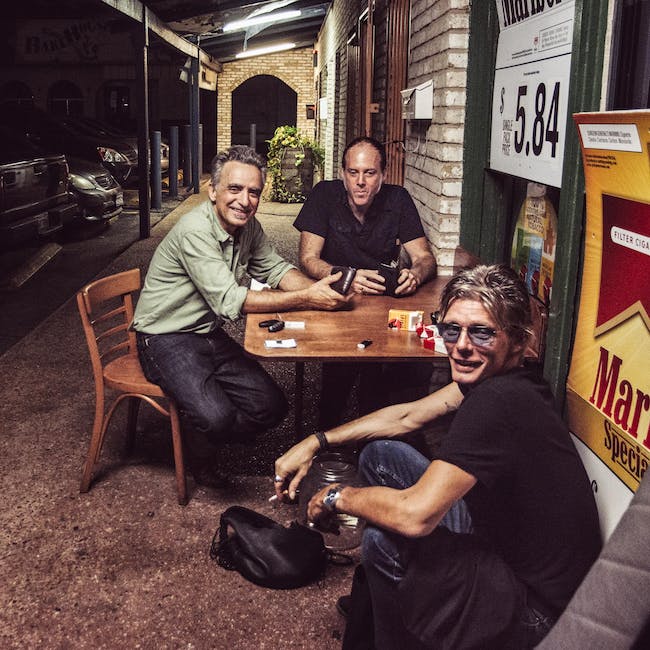 **Due to scheduling conflicts the show has been moved to Dawson St. Pub** *

iCal
Google
**Due to scheduling conflicts the show has been moved to Dawson St. Pub** **Tickets will be honored** http://www.dawsonstreetpub.com/

Big Top, the new-old Lucky Hound Music release from veteran singer-songwriter Michael Fracasso, is the opposite of what’s commonly referred to as a “grower.” Expertly produced by his fellow Austinite Charlie Sexton, who is probably picking guitar alongside Bob Dylan as you read this, Fracasso’s sweetly affecting voice and masterful songcraft have never sounded so vibrant. To say it another way, Big Top features 10 hook-filled gems that simply demand repeat listens.

“A Deal’s a Deal” juxtaposes Fracasso’s gifts for roots attitude and pop charm, with gritty, bluesy verses that open up into a gorgeously tuneful chorus. Sexton fleshes out the Sgt. Pepper’s delights of “Thurston’s Lament” with nuanced layers of George Martin-style wizardry. “Laughing Boy” underscores the heaven-sent voice that critics have rightfully compared to Roy Orbison, Buddy Holly and Gene Pitney. A cover of Mark Johnson’s “Crazy Little Cricket” serves as a reminder of how potent Fracasso can be in his natural habitat, helming a hot band in a packed-out Austin joint.

Songs like “Mother Nature’s Traveling Show” and “My Blue Heaven,” both of which Fracasso wrote following his mother’s passing, showcase his signature melancholy: Even at his most wistful, he offers a sense of uplift through the honeyed quality of his high tenor and his innate feel for melody. Fracasso explores this affecting duality even before track one. His chosen cover art, a beautiful vintage Frederick Grasier photograph of a somber clown, brings to mind what the songwriter calls “the circus aspect to life: Underneath the excitement of the Big Top or the blue sky and green grass of summer, the clowns cry happily.”

In the end, Big Top, which Fracasso and Sexton recorded 15 years ago, begs a fascinating question: Why were these miraculous songs buried for so long? How could a heart-melting masterpiece by your favorite songwriter’s favorite songwriter be left to collect dust for all these years?

Big Top was captured following the sessions that yielded 1998’s World in a Drop of Water, Fracasso and Sexton’s first collaboration. The two had joined up a few years earlier, after Fracasso’s regular drummer dropped off a gig. When Fracasso’s bassist, the late Austin mainstay George Reiff, suggested Sexton fill the spot, the bandleader was bewildered. “I said, ‘He doesn’t play drums!’” Fracasso recalls today. “And George says, ‘Oh, yeah, he does. And he knows all your stuff.’” Sexton, like most of the Austin scene, had followed Fracasso’s thoughtful output since the beginning of the decade. “I called Charlie, and he showed up at [the storied Austin club] the Hole in the Wall, and that was the beginning of our relationship,” Fracasso remembers. “He’s been such a great supporter of my music. I sometimes feel overwhelmed by his generosity and spirit.”

Early on in the studio, their chemistry just clicked. On World in a Drop of Water, wrote Texas Monthly, Fracasso “reinvents his seductive melodies in a panoramic setting, aided by the lush pop approach of producer Charlie Sexton”; the magazine also remarked on how the “complex arrangements decorate the rich character of Fracasso’s voice, and it all works beautifully.” Despite its artistic success, however, the record was more bust than breakout. Airplay and print attention fizzled quickly, due in no small part to the country-music flack hired to push the album. An ensuing promotional trek, on which Fracasso regrettably forewent a tour manager, was damn near disastrous: the van broke down, a date was missed, more mistakes were made, tensions were high. After all was said and done, the World in a Drop of Water chapter was disheartening. “I didn’t feel like releasing another record and going through that again,” Fracasso explains. So Big Top went straight into the vaults.

Of course, disappointment is always relative, and Fracasso certainly hadn’t gotten used to things coming easy. In 1952, he became the first member of his Italian family born in the United States, and was raised in the hardscrabble steel town of Steubenville, Ohio. (Think Michael Cimino’s The Deer Hunter, which used the working-class hub as a filming location.) An introspective kid who adored music and harbored an interest in the nascent ecology movement—his first song, written in high school, was titled “Pollution Blues”—Fracasso never really jibed with the environmentally wrecked city where football reigned supreme. He worked, uncomfortably, for a spell in the mills, studied environmental science at Ohio State and entered grad school at Washington State University—an attempt, Fracasso admits, “to get as far away from where I was as possible.” In order to turn his songwriting habit into more frequent live performances and perhaps an actual career in music, he left grad school early and headed to New York City.

In New York, Fracasso took part in the influential songwriters’ scene that coalesced around the Cornelia Street Café in Greenwich Village. There, he refined his material among wordsmiths like his friend Suzanne Vega, Jack Hardy, Lucy Kaplansky and Steve Forbert. He got a gig at Kenny’s Castaways, but it came with a catch: No English-major folkie stuff—you need to be fronting a band. An open-mic acquaintance helped Fracasso collect musicians, and introduced him to the game-changing rock, roots, pop and new wave happening in venues like CBGB and the Mudd Club. That version of New York music better suited Fracasso’s dynamic amalgam of influences than did the poetry workshops he’d been immersed in; in addition to the likes of the Beatles, Paul Simon, Neil Young and Lou Reed, his songwriting took crucial cues from what he terms the “brutal simplicity” of bluesmen like Howlin’ Wolf. He forged ahead and began learning how to lead a unit and get a rowdier room on his side. One night a fan—who also happened to be employed as a major-label A&R rep—gave it to him straight: He was brilliant, but New York wasn’t the place where his rootsier sound could gain a foothold. In 1990, Fracasso moved to Austin.

He’d gotten a taste of Austin’s wonderfully diverse scene back in New York, taking in shows by Butthole Surfers, Kinky Friedman, Joe Ely and others, but he’d only ever driven through the city once before he settled there. Still, it didn’t take long before the move proved fruitful. That lithe rock-and-roll voice and those brainy yet bar-friendly tunes earned Fracasso buzz around town straight away. In 1993, through the respected Austin-based indie Dejadisc, he made a belated but auspicious debut with Love & Trust, featuring a duet with Lucinda Williams. More name-making successes would follow in the years ahead: a tune co-written with Alejandro Escovedo; spots in all-star tributes to Woody Guthrie, Mickey Newbury and Townes Van Zandt; and five additional critically worshipped albums, including the more recent triumphs Saint Monday—one of the two Fracasso records boasting a duet with Patty Griffin—and Here Come the Savages. “His songwriting remains impressive,” the Austin Chronicle wrote of Savages, “but with the addition of some well-chosen and often unexpected covers, he delves into his feelings of love, loss, and mixed emotions deeper than before.”

For Fracasso, his discography is also a sort of ongoing journal. “Every album of mine encompasses some period in my life, and I really love that about them. But I don’t mind playing any of my songs from any period,” he explains. Much of World in a Drop of Water came to him on a wave of anger and frustration, and Big Top too reflects a certain thematic darkness or cynicism. “Sometimes I think about the person I was back then,” he says. “We all change, and I couldn’t get back there to write those songs again. They were of a time and place for me.”

Indeed, Fracasso’s life today is transformed. He’s a proud father with a thriving cooking career that dovetails comfortably with his music—including innovative combined cooking/singing performances. In 2013 he released a book, Artist in the Kitchen: A Brief Autobiography in Food, detailing this lifelong passion, and his late-night feasts, prepared after gigs for an exclusive coterie of musicians and pals, have entered Austin’s lore.

There have been downs too, including a divorce and the 2017 death of his devoted bassist and dear friend George Reiff, who appears on Big Top. In fact, it was at Reiff’s memorial, which Sexton directed, where Lucky Hound A&R rep Michael Ramos was stunned by these songs. Fracasso is excited, and relieved, that the work is finally out there, though his unassuming nature doesn’t leave much room for self-promotion. “It was a collaboration that just kind of existed in a time,” he shrugs. “I think it speaks for itself.”

Lucky Hound Music – an independent artist development label uniquely committed to building careers of music artists from “the ground up”, offering support in every aspect of music and visual production, publishing and licensing, as well as marketing and distribution. Lucky Hound Music utilizes the world-class audio and sound stage production campus of the Studios At Fischer in the Texas Hill Country, as well as other facilities in key markets around the country.