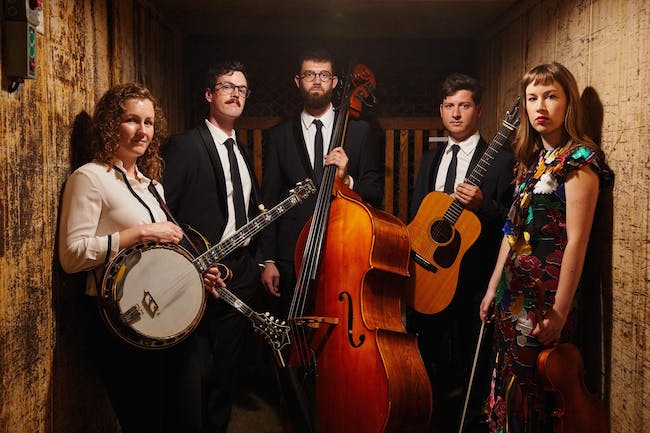 City on a Hill

Although their sound is rooted in traditional bluegrass, Mile Twelve surveys a broader landscape on their newest album, City on a Hill. All five band members bring their own influences and observations into the music, resulting in a project that feels contemporary, thoughtfully crafted, and relevant.

“Original bluegrass music, written and played by young people, is very much alive,” says band member Evan Murphy. “I hope people take away that the writing really matters and the arranging really matters. It’s about the material, playing it in a way that feels honest. It’s not like a political album in the sense that we’re beating people over the head with anything. We just want to tell stories that are authentic.”

The album title alludes to the idealized imagery of a shining city on a hill – a historical phrase that has often been applied to Boston, where the band got its start. Murphy adds, “We realized that so many of the different characters in these songs were in crisis, or had been failed in some way, or were failing themselves in some way. It’s kind of an unintentional theme but it came out in the songwriting. There are a lot of stories out there that can be told in this medium.”

The Mile Twelve lineup offers five of the most promising young musicians in bluegrass: David Benedict (mandolin), Catherine “BB” Bowness (banjo), Bronwyn Keith-Hynes (fiddle), Evan Murphy (acoustic guitar, vocals), and Nate Sabat (bass, vocals). All are credited as songwriters because everyone in the band shaped the material in its rawest form and throughout the recording process. Murphy and Sabat initiated most of the lyrical ideas for City on a Hill while Benedict wrote the instrumental track, “Rialto.”

“We all inspire each other and we recognize and respect that everyone individually has different strengths and different talents, and that’s what makes it so collaborative,” Murphy says. “The amazing thing is that everyone in the band can do something at a really high level that maybe somebody else can’t do. That’s the balance. We’re all challenging each other.”

Produced by Bryan Sutton and engineered by Ben Surratt, City on a Hill begins with a lively rendition of Richard and Linda Thompson’s “Down Where the Drunkards Roll.” From there, the album explores a number of unexpected perspectives, such as a modern war veteran with PTSD, a Jewish immigrant fleeing war, or a man who cannot escape the bureaucracy of the penal system. As the album winds down, a few light-hearted numbers such as “Barefoot in Jail” and “Innocent Again” lead to the poignant “Where We Started,” a portrait of small-town life written by John Cloyd Miller.

“We decided to record in more of a live kind of way on this album,” Murphy says. “We played our instruments and sang at the same time, and several of us were in the same room as each other and we were all tracking at the same time. There was no metronome, no tuning. It was very real, you know? I think we all feel like the end result is better because of that.”

Those kind of accomplishments were far from anyone’s minds when Murphy, Sabat, Keith-Hynes, and Bowness started crossing paths at house parties and pick-up gigs in Boston. In time, they recognized each other as regulars at a Cambridge dive bar called Cantab Lounge during Tuesday night bluegrass jams. In 2014, they decided to put together their own band. By gathering grassroots and industry support, they were well on their way when Benedict, who was living in Nashville at the time, joined the band in 2016.

Bryan Sutton observes, “I’m a fan of bands who strive for a balance of being musically unique and individualized, while at the same time working to include time-honored traditions found in this music. This blend is not an easy thing to accomplish. Mile Twelve does this with well-honed and refreshingly honest songwriting, along with powerful playing, singing, and performing. Not only did I have the privilege of producing this album, but I also got a chance to know the band better. I’m impressed with how much they bring out the best in each other.”

Mile Twelve is named for a familiar road sign on the outskirts of Boston – a marker that they’ve passed countless times while heading out on tour. Through an active social media audience and radio support from terrestrial stations and Sirius XM, the band has found receptive audiences all over the country. And rather than signing to a label, they self-financed City on a Hill by setting aside revenue from Onwards.

Asked about the band’s influences, Murphy cites Alison Krauss & Union Station for their precision and Del McCoury Band for their mainstream appeal, along with innovators like Punch Brothers and the Infamous Stringdusters. As for songwriting, Murphy praises the mastery of Gillian Welch and David Rawlings for their acoustic arrangements, their uncluttered writing style, and their ability to tell a compelling story. Of course, these are creative benchmarks for Mile Twelve as well.

“As a songwriter, you’re witnessing a lot going on around you,” Murphy says. “It can be limiting to sit down and write a song and think, all right, this has to be based on my personal experience, or something that has happened to me directly. We all see what’s going on around us in the world. It really can open up your mind to think that I’m allowed to write almost anybody’s story if I want to, if it feels true.

Although their sound is rooted in traditional bluegrass, Mile Twelve surveys a broader landscape on their newest album, City on a Hill. All five band members bring their own influences and observations into the music, resulting in a project that feels contemporary, thoughtfully crafted, and relevant. Produced by Bryan Sutton and engineered by Ben Surratt, City on a Hill follows significant recognition from the bluegrass community, including three IBMA Momentum Awards. With members based in Boston and Nashville, the lineup includes David Benedict (mandolin), Catherine “BB” Bowness (banjo), Bronwyn Keith-Hynes (fiddle), Evan Murphy (acoustic guitar, vocals), and Nate Sabat (bass, vocals).