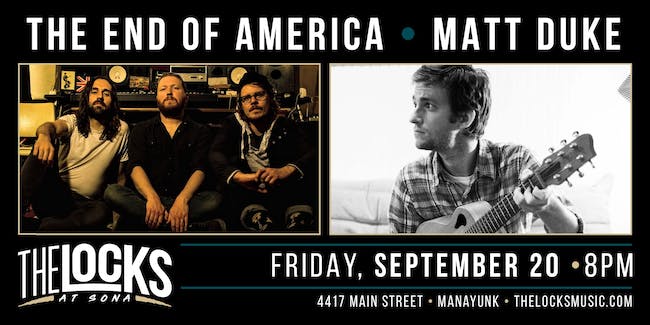 The End of America

iCal
Google
The End Of America and Matt Duke

The End Of America

Philadelphia natives The End of America (TEOA) caught the attention of the industry and fans alike with their debut release Steep Bay (2010), following up with the sophomore LP Shakey (2012) and the critically acclaimed eponymous S/T album in 2016. TEOA’s new single “Break Away”, due out June 7, 2019 on all digital and streaming platforms, will also be available as a limited edition 7” vinyl and features a version of Simon and Garfunkel’s “America” on the B-side.

“Break Away” is the first in a series of new songs that will be released by TEOA in 2019. TEOA is blazing new trails in the digital age by ditching the album format and releasing a new song each month for the remainder of 2019. Recorded at a barn cabin and produced by the band and mixed by Trevor Leonard, “Break Away” takes The End of America in a new bold direction, morphing acoustic instrumentation with drum loops and the bands’ signature harmonies. The result is a cohesive mix of classic harmonies and new sounds delivering a fresh outlook on what future will hold for TEOA. “Break Away was written and recorded on the spot during a break mid-tour. It was one of those sessions that felt like magic. A full moon. There was a pond full of peepers near the cabin and you can hear them on the tracks. We played on wineglasses and looped stomp/clap ideas. Lots of spontaneity and experimenting. Somehow it still sounded like us. We’re excited to let this one out of the bag”, states Brendon Thomas.

The End of America (James Downes, Trevor Leonard and Brendon Thomas) consists of a group of friends who met on the road, after singing harmonies on each other’s songs while on tour as solo artists. “We lucked out, our voices just seemed to blend together naturally. Since, we’ve been burning across the countryside, touring, recording in remote locations, just having fun. It’s great being in a band with your best friends.” The Philadelphia trio credit their name to Kerouac’s On The Road -- relating to travelling “across the groaning continent” in search of inspiration. The sound is centered on their voices, weaving 3 distinct leads into captivating harmonies over a solid foundation of Folk, Rock, and Americana. WXPN’s The Key states TEOA is, “soul-striking harmonies mixed with folk-rock melodies.”

he End of America has been recognized for their powerful live performance which highlights dynamic songwriting, harmonies and playful stage banter. They have performed at festivals across the East Coast and Midwest including the 2016 Philadelphia Folk Festival where they were voted “Favorite New Artist” and will return for a performance at The PFF in 2019. In 2017 TEOA won the Emerging Artist Showcase at Falcon Ridge Folk Fest, returning in 2018 to perform as FRFF’s “Most Wanted” band.

TEOA have shared stages with the likes of David Bromberg, Brian Fallon, Larry Campbell, Mandolin Orange, Wild Child, The Ghost of Paul Revere, Rocky Votolato and Beck. Beck invited TEOA to play at his Song Reader album release show in Los Angeles after hearing the trio's rendition of Please Leave A Light On When You Go. Their performance was broadcast live on KCRW and earned praise from Spin and Filter.

Having taken time to refocus after the 2014 release of "singer/songwriter", Matt Duke returns with the release of "The Phoenix", a conceptual album about clinical depression, the desire to come out from under, and the ebb and flow of one's emotional state of being. Realized through the help of producer and engineer Andrew Lipke (Hezekiah Jones, Chris Kasper), Duke returned to the studio with longtime friends and fellow musicians Dane Kline, Nathan Barnett, Andrea Weber, and others, to create an album that is both insightful thematically, while also eclectic in its artistry. Presently a student at Aria's Health School of Nursing, Duke spends much of his time wondering where he left his keys.