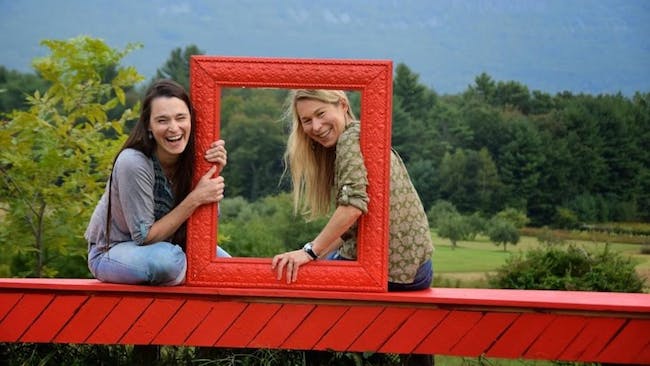 The Nields––sisters Nerissa and Katryna––have lit up the folk circuit since 1991. For twenty-eight years now, the sisters have traveled the country as members of beloved folk rock band The Nields. With18 albums, major and independent record and publishing deals, performances with 10,000 Maniacs, The Band, James Taylor, and the Indigo Girls, they have lived the Rock & Roll life. Since becoming mothers (each sister has a daughter and a son) they have gone on to broaden their repertoire with children’s CDs, a DVD and a book All Together Singing in the Kitchen: Creative Ways to Make and Listen to Music as a Family. The Nields have been lauded for their gorgeous, lilting, sibling harmonies, their wise, classic, folk/pop songs, their hilarious banter on stage, and their generosity and warmth in performance and engagement with their fans. Their latest album, XVII, celebrates a lifelong career whose aims continue to be a deep faith in community, loyalty, and the power of music to bring joy. They have just released a Christmas album, and are at work on music for a soundtrack to Nerissa’s forthcoming novel, The Big Idea.

On first listen, some might glibly categorize this acoustic folk trio-turned-modern rock quintet as Alanis Fronts the Indigo Girls. But listen to [the Nields] twice and you’ll start to catch the twists in the tales, the quirks and ironies that make every song a short story. And then you’ll be hooked.

Imagine if Natalie Merchant had a sister with an equally good voice singing perfect harmony with her. Intimate and electric.

If you don’t like the Nields, you need to get your ears checked.

A masterful mix of modern folk with an alternative edge.

[The Nields] sounds like the Roches meets the Cranberries, but with better songwriting and better vocal harmonies.

If there’s one constant here, it’s The Nields sisters beautifully sweet vocal harmonies that sound eerily like the Roches singing Lush in a really big room. Its infectious stuff.

The marvelously expressive Katryna and Nerissa Nields provide vocals sounding at various times very much like the Bangles, the Roches and Alanis Morrissette--a delightful discovery.

a gentle explosion of high-strung harmonies and spare arrangements of songs that snap like cinnamon sticks. They ride their dynamics from literally whispered passages over tick-tocking sidestick or no drums at all, up to electric squalls that push Katryna and sister Nerissa Nields vocals without overwhelming them.

As the work of the Everly Brothers or the McGarrigle Sisters has amply demonstrated, there are few sounds as sublime as close harmonies rendered by siblings. In the case of western Massachusetts folk rockers the Nields, the siblings are sisters Nerissa and Katryna Nields, and their inimitable vocal blend is a disarming mix of clean folk harmonies and clenched Generation-X angst.

Guitarist Nerissa has written the clear-eyed, literary lyrics and sister Katryna has provided a gloriously eccentric vocal delivery Lots of backward glances and relationship foibles punctuate this quiet collection, which is ideal for harmony addicts and dreamers alike.